The first 2016 issue of Western Forester contains a pair of short articles on the Nenana Ridge crown fire experiment and fuel break effectiveness at Funny River and the studies in progress on fuel break effectiveness in Alaska.  Eric Miller (BLM-Alaska Fire Service) and Nathan Lowjewski (Chugachmiut Forester) did a nice job on these write-ups!  Eric’s article gives the first published account of what happened in 2016 when wildfire challenged a 10-year old thinned fuel break in black spruce, as well as insight to the “hows” and “whys” of fire behavior in fuel breaks.  Here’s a link to the issue:  http://www.forestry.org/media/docs/westernforester/2016/WFJanFeb2016-2_LT3qttf.pdf 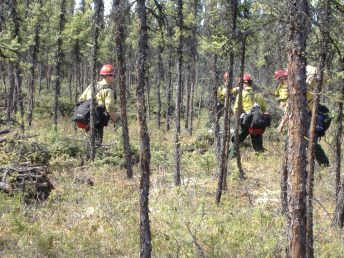