Incident fire behavior analysts predicted the 2011 Las Conchas fire would calm down at night, but instead they witnessed a night-time blow-up between 10 p.m. and 3 a.m. where 35-ft high “rolling barrels of fire” advanced rapidly downhill, quadrupling the fire’s size.

Rod Linn at the fire Los Alamos National Laboratory has been studying wildfires for 22 years, using computational models including weather and topography to explain unexpected behavior.  In a recent Popular Science article he sheds light on some very interesting scenarios that caught the analysts off guard, including how an inversion developing in the evening spilled out of the Valles Grande basin like an overflowing bathtub and spawned the 26 ft/sec downslope night winds that blew up the Las Conchas fire.  The article is very readable and sheds light on several other species of extreme fire behavior that will be of interest to anyone on the fireline.  Pick up the July/August Popular Science or read it for free online here:  https://www.popsci.com/las-conchas-wildfire-pillar-of-fire

P.S. Rod also published a series of articles for firefighters from the Los Alamos Lab and they are online.  Here’s the link to the first one:  Computer modeling helps us learn to live with wildfire.

Late last year, Rick Thoman, NWS Climate Scientist in Fairbanks, predicted a warm winter for most of Alaska at his December 2014 NWS Webinar.  That forecast worked out pretty well, with Dec-Jan-Feb temperatures well above normal for that period all over the state! So what does he say now about the upcoming spring and start of Alaska fire season? At a March 19 forecast briefing for fire managers, Rick pointed out benefits of the newer “dynamic” climate models which continuously update their algorithms with the latest weather observations.  This kind of modeling requires major computing power so it’s only become 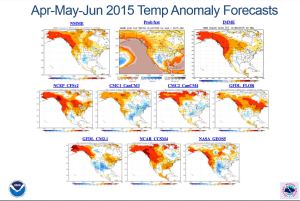 possible in the last decade or so with availability of supercomputing centers.  The collection of multi-model ensembles he showed universally point to a warm or VERY WARM April (goodbye snow pack!) and that seems to extend out to the April-May-June outlook as well, with pretty good confidence.  One moderating influence in the forecast comes from mid-range precipitation outlooks from two independent forecast tools which call for above-normal precipitation, especially in the eastern Interior.  The missing link that fire managers would like to be able to forecast is convection (lightning), but Rick says that may be coming as climate modelers gain experience with the new dynamic models.  AICC Predictive Services has now posted their seasonal outlook for the 2015 Fire Season on the web, where you can learn about Modoki El Niño and what that may mean for fire season!

Rick Thoman, NWS Climate Scientist in Fairbanks, said “Save this one!” when he showed this slide about the CPC’s spring temperature prediction in his Dec. 19 NWS Webinar.  So I did:  it’s a pretty bold forecast for a warmer than normal early spring in much of Alaska.  Of course, it’s still hard to know what that might mean for fire season.  We know that warmer springs can be associated with premature disappearance of snow and higher fire danger in that pre-greenup season though.  On the other hand, well-timed spring rain, after the ground thaws enough to receive it, can just as easily put a damper on duff fuel moistures well into the summer.  And, it’s a lot easier to predict temperature than precipitation.  Still, when I hear the starting line-up:  PDO (Pacific Decadal Oscillation) in a warm phase, a fairly robust El Niño, and warm early spring–I can’t help but think that it could be an interesting year.  It looks like Southcentral Alaska may be in the cross-hairs again too.  Check out the latest seasonal outlooks as the season progresses at CPC’s website. 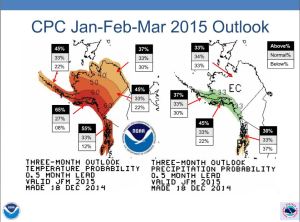 Whether you were there or missed it, the presentations and recorded videos from the  2014 Canadian Forest Fire Danger Rating System Summit held in Fairbanks October 28-30th are worth reviewing.  2014. The workshop was a great opportunity to discuss fire risk indices and fire behavior applications in Alaska and to hear how fire managers in Canada, the Great Lakes States and around the world are using the Canadian Forest Fire Weather Index System. There were over 50 managers and scientists in attendance. 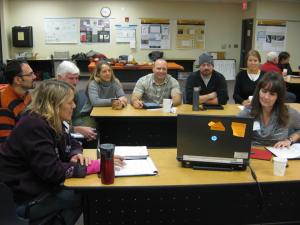 Breakout group at the October 2014 CFFDRS Summit in Fairbanks

The latest findings on predicted vs. observed climate trends across the US were presented at a Webinar hosted by ACCAP and the National Climate Assessment Team–Alaska Chapter on March 6, 2013.  Presenters were Dr. John Walsh, a well-known weather and climate scientist from UAF, and Dr. Sarah Trainor, Director of ACCAP.   The Alaska Fire Science Consortium  recently posted a summary on the findings that are especially relevant to Alaska and to the fire management and science communities.  You can download a copy HERE.  Also, the Webinar was recorded and is still available for viewing at ACCAP’s website:  https://accap.uaf.edu/?q=webinar/national-climate-assessment-alaska-chapter

Jan Passek, USFWS Fire Specialist, and Heidi Strader, Weather Forecaster from the Alaska Interagency Coordination Center will demonstrate how to input daily weather observations used  to  calculate Fire Danger using WIMS–the Forest Service Weather Information Management System!  The Webinar is 1:30 p.m. AST on Monday, February 25th. Come join the webinar as we discuss: WIMS Roles and responsibilities, Access Control Lists- what are they, who controls them?, NFDRS, Firefamily Plus, Weather Detective skills and what to look for Monday mornings to ensure weekend weather is updated. Registration information is available from ayork@alaska.edu.