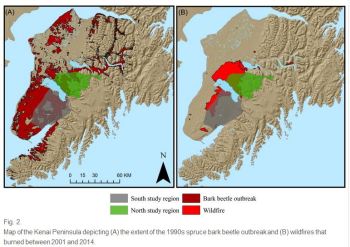 It has long been assumed that bark beetle outbreaks on the Kenai lead to increased fire danger, even though beetle disturbance has been shown to have mixed effects on crown fire potential, fuel profiles and burn severity in the Rocky Mountains.  Winslow Hansen, doctoral candidate at the University of Wisconsin, recently published an analysis of beetle outbreaks and fire on the Kenai Peninsula between 2001-2014 (Hansen et al. 2016).  He looked at effects in pure white spruce stands–where duration of beetle attacks is longer and mortality greater–and in mixed white and black spruce stands common on the northern peninsula, where attacks are less severe.  His analysis indicates mixed effects:  severely damaged white spruce stands did not demonstrate increased fire occurrence (instead, % canopy cover appeared to drive likelihood of burning) while the mixed white/black spruce stands did show a positive correlation with beetle outbreaks and fire.  Winslow explores the reasons for this in his relatively short article:  worth reading.  You may remember Winslow from his previous work on beetles/fire effects and property values on the Kenai (recorded MS Thesis defense) and climate effects on fire regime (recorded 2015 presentation).